We deal with fires and fireplaces every day and sometimes we get carried away with the jargon and terminology. Our glossary is a list of the phrases and words that you will find on this site. We hope that this will help you understand a little more about the functions, types, styles and features of the fires we sell and make a more informed decision when buying your new fire. If you are unsure of any aspect please contact our friendly team who will be more than happy to help

Aperture
Is the structural opening formed in your wall or chimney breast to accomodate your fire. Also known as a Builders Opening or fireplace recess. Traditionally set near the floor, but we are seeing more and more ‘inset’ fires fitted higher up the wall.

Air Vent
Air vents are a legal requirement for rooms where gas or solid fuel fires are located. Insufficient air supply can cause the flue to vent combustion gases into the room with potentially fatal results.

Balanced Flue Gas Fire
A balanced flue gas fire is suitable for use in a house without a built-in chimney or flue. They are sealed appliances that work by drawing air and venting external air via a pair of co-axial tubes into the fire for combustion. These fires tend to be very efficient as much less heat is lost than would be when using a chimney.

BTU
BTU stands for ‘British Thermal Unit’ – a unit of heat measurement. It is the amount of energy needed to heat one pound of water by one degree fahrenheit. The main measurement used on this website is kW (kilowatts), 1kW is equal to 3413 BTUs.

Carbon Monoxide
Is an odourless, colourless, tasteless, poisonous gas produced by the incomplete burning of carbon-based fuels such as wood, coal, oil and gas. Sometimes called The Silent Killer, Carbon Monoxide is very dangerous and can poison people and animals who are exposed to large amounts or small amounts over long periods of time.

Carbon Monoxide Detector
Fitting a Carbon Monoxide detector is a legal requirement in any room that has a new solid fuel burning appliance, it is a safety feature to inform you if carbon monoxide is present in the room. Whilst it may not be a legal requirement to install a detector if you only have a gas appliance it is surely a sensible course of action to take knowing that you and your family are protected from carbon monoxide poisoning.

CO Detectors supplied by Direct Fireplaces have a seven year warranty and are all continuous test models, they feature a test button to ensure correct operation. Batteries (included) should be tested regularly and replaced when necessary. CO Detectors are not smoke alarms and should be used in addition to these.

Catalytic Converter
A catalytic converter cleans the exhaust gases from a gas fire by using a catalyst, usually platinum, to speedily separate carbon monoxide, hydrocarbons and other noxious gases. These converted gases (carbon dioxide, oxygen and nitrogen) are naturally found in the air we breathe.

Chimney
Chimneys rely on the natural circulation of heated air to safely expel smoke and emissions out of the home.

Class 1 Chimneys – These are the traditional chimneys and usually have a wide chimney breast with plenty of space to accommodate deeper fires, fireplaces or stoves.

Class 2 Chimneys – These are found in more modern homes and are built from pre-cast flue blocks within an external or internal wall. They tend to have a shallow depth and don’t usually have a chimney breast so require a slimmer depth fire. Deeper appliances can be installed with a deeper rebate on the fireplace. 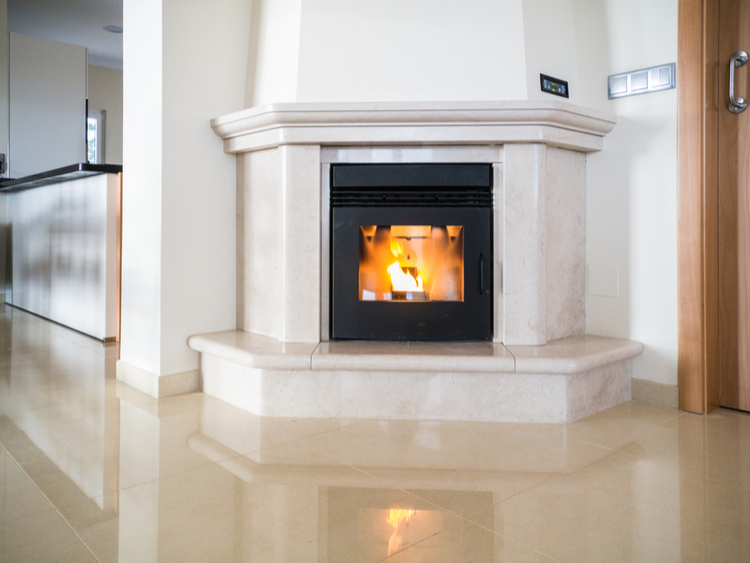 Convection heat
Convection currents occur when air particles with lots of heat energy rise and cooler air particles fall into warm areas. Heat is transferred from place to place around the room.

CORGI
CORGI stand for ‘Council for Registered Gas Installers’. CORGI was the gas fitters watchdog appointed by the UK Health & Safety Executive. They operated as watchdog between 1970 and 2009. CORGI now operates a voluntary registration scheme for gas installers in the United Kingdom. They also provide accreditation for electricians, plumbers, builders, renewable energy engineers and certain other trades.

Since 2012 all gas engineers must be on the Gas Safe Register by law.

Defra
The Department for Environment, Food and Rural Affairs (Defra) is the government department responsible for environmental protection, food production and standards, agriculture, fisheries and rural communities in the United Kingdom.

Under the Clean Air Act 1993, it is an offence in the UK to emit smoke from any chimney, fixed boiler or furnace if located in a designated smoke control area. It is also an offence to burn an ‘unauthorised fuel’ for use within a smoke control area unless it is used in an approved appliance.

Defra approved appliances have been tested to confirm they are capable of burning an unauthorised or inherently smoky solid fuel without emitting smoke into the air. Most UK urban districts are smoke control areas check with your local authority’s Environmental Services department for full details.

Efficiency
When we talk about ‘efficiency’ with fireplaces, we mean the relationship between the energy used to provide heat and the heat output realised. With the exception of flueless gas fires and electric fires, gas and solid fuel fires cannot be 100% efficient as some heat is always lost to the chimney or flue. Some “decorative” gas fires are only 25% efficient, even the most efficient open fronted fires are often no more than 67%, but glass fronted fires can help efficiencies improve to over 80%. The type of fire right for you depends on how much you rely on it for heat, whether it is a primary or secondary heat source or purely decorative.

Electric Fires
Electric fires are an easy, use anywhere heating solution, just switch on and heat – no chimney required. They usually give 2kw or less of heat and most have high and low heat settings plus a flame effect only option. Electric fires are considered to be 100% efficient as 1kW of electricity is used to produce 1kW of heat in an hour. They are available in a variety of designs, modern and traditional and many now use LED bulbs making them more efficient in ‘flame only’ mode.

Emissions
The by-products of gas or solid fuel combustion vented out of the home via chimney or flue. Emissions consists of various gases: carbon monoxide, carbon dioxide, nitrogen oxides, benzene and particulates which together make up the smoke seen escaping chimneys.

Flueless Gas fires
Flueless gas fires do not require a chimney or flue as the combustion gases pass through a catalytic converter – this means they require 100cm2 ventilation and minimum room sizes do apply. Heat output is limited although they are 100% efficient and they are designed to be used as a secondary heat source.

Fret
A fret is the decorative front piece that covers the fire basket and ash pan on a solid fuel fire. Many gas and electric fires now have a fret in their design and some manufacturers make many interchangeable fret options for their models.

Gas Safe
Gas Safe Register replaced CORGI as the gas registration body in Great Britain and Isle of Man on 1 April 2009 and Northern Ireland and Guernsey on 1 April 2010.

Gas Safe Register is the official gas registration body for the United Kingdom, Isle of Man and Guernsey, appointed by the relevant Health and Safety Authority for each area. By law all gas engineers must be on the Gas Safe Register.

Hearth
The floor of the fireplace usually made of stone, brick or some similar non-combustible material. The hearth is a safety feature to stop fires from occurring in the home.

Many of the hearths we sell are decorative, for use with gas or electric fires. When fitting a solid fuel fire you must have a “Slabbed hearth”, see our explanation or call our experts for more information.

HETAS
HETAS is the official body recognised by UK Government to approve biomass and solid fuel domestic heating appliances, fuels and services including the registration of competent installers and servicing businesses.

Limestone
A natural sedimentary rock composed of fossils and tiny organisms compacted together over thousands of years. Limestone varies in colour and texture according to origin. Aegean Limestone tends to be white while Portuguese Limestone is more often cream to beige in colour. It has a porous surface but this can be sealed to help keep clean and well maintained. Click here to take a look at our limestone fireplaces.

LPG
Liquid Petroleum Gas (LPG) is an alternative to natural gas – it is common in rural areas and not connected to the gas mains pipeline. Direct Fireplaces sell gas fires for both LPG and natural gas. LPG has a higher calorific value than natural gas so gas appliances are NOT interchangeable, please choose carefully when ordering your gas fire.

Marble
A natural metamorphic stone with random veining formed when great heat and pressure have been applied to limestone. Marble can have a polished or unpolished surface and can be porous. Click here to shop our marble fireplace packages.

Micro Marble
A man-made material formed by reconstituting crushed real marble and colourings in a polymer resin. Cool to the touch, micro marble has all the properties of natural marble but without the veined or patterned appearance. Click here to take a look at our range of micro marble fireplaces.

Oxygen Depletion Sensor
An oxygen depletion sensor is a safety device fitted to gas fires which monitors the air quality of the room and shuts down the gas fire if there is not enough oxygen in the room.

Period Fireplaces
These are usually fireplaces and surrounds recreated from designs popular in the 1800s and early 1900s. Specifically:

Power Flue Gas fires
Power flue gas fires are gas fires with an electric fan which expels combustion gases through piping to an external wall. The fire does not necessarily have to be located on an external wall however the pipework must convey all gases safely outside the building.

Pre-cast Flues
Pre-cast flues are the chimneys found in modern houses, shallow in depth and usually situated within an internal or external wall allowing for the use of a gas fire without the need for a full size chimney and chimney breast. This type of chimney is called a Class 2 chimney.

Slabbed Hearth
Many hearths are for decoration only and are hollow. If you are installing or replacing a solid fuel or real fire hearth it must be “slabbed”.

“Slabbing” is when the hearth is cut into three then jointed back together and filled with a cement and vermiculite mixture. A filled and jointed slabbed hearth is much better at dealing with temperature changes and will expand or contract without cracking.

Smoke Control Areas
Smoke control areas were setup in the UK in 1956 to limit the amount of smog and smoke pollution in urban areas following the Great Smog of London in 1952. The 1995 Environment Act superceded the Clean Air Act of 1956 and introduced new regulations for air pollutants.

If you live in a smoke control area you may only burn certain types of fuel. You can’t emit smoke from a chimney unless you’re burning an authorised fuel or using an exempt appliance.

Check with your local authority to see if you live in a smoke control area. Their environmental services department will be able to help you.

Victorian Fireplaces
These are usually cast iron fireplaces and surrounds reproduced from designs first used in the reign of Queen Victoria between 1837 and 1901.