Direct Fireplaces >> Wider Feature >> What Is Involved in a Chimney Inspection and Chimney Sweep?

Whether you’re having a new fireplace fitted, your flue replaced or you’re opening up a fireplace it pays to have your chimney inspected and swept. But what exactly does a chimney inspection and sweep involve? Keep reading to find out.

Why do I need my chimney inspected and swept?

It might not seem immediately obvious why you need your chimney inspected. But it’s important that you do have it inspected regularly. Why? A chimney does so much more than simply venting smoke and combustibles outside.

A chimney plays an important part in the overall functioning of a fireplace. It protects you and your family from the harsh chemicals and gases that can be expelled by a fire. So, it pays to have your chimney inspected.

Chimneys also suffer wear and tear just like any other part of a building. Over time metal flue liners can corrode or warp. The lining of your chimney can become cracked and crumble. The bricks and mortar of the chimney itself can deteriorate.

It’s not just about maintenance. Chimneys can also accumulate creosote and other products of combustion. If these combustibles are left to build up over time, then you run the risk of your chimney catching fire.

How often do I need to have my chimney inspected and swept?

As a general rule of thumb, it’s recommended that you have your chimney inspected every twelve months.

However, according to the National Association of Chimney Sweeps (NACS), factors such as the type of chimney, type of fuel, how long (and how often) the fireplace has been used, the type of appliance and the moisture content of wood are all factors that determine how often you should have your chimney inspected and swept.

For example, they recommend:

How do I know if my chimney needs sweeping?

If you’re not sure when your chimney was last inspected and swept, then there are a number of things you can look for that will tell you it’s time to get it cleaned:

If you spot any of these signs, then it’s time to call the chimney sweep.

Do I still need my chimney sweeping if it is lined?

Many modern chimneys make use of flue liners. These are flexible metal tubes which sit inside the chimney flue and help funnel smoke and combustibles up and out into the open air.

There’s a bit of an urban myth that lined chimneys don’t need to be swept. But it’s exactly that – a myth!

Chimneys with flue liners should be swept according to the same schedule as outlined above. 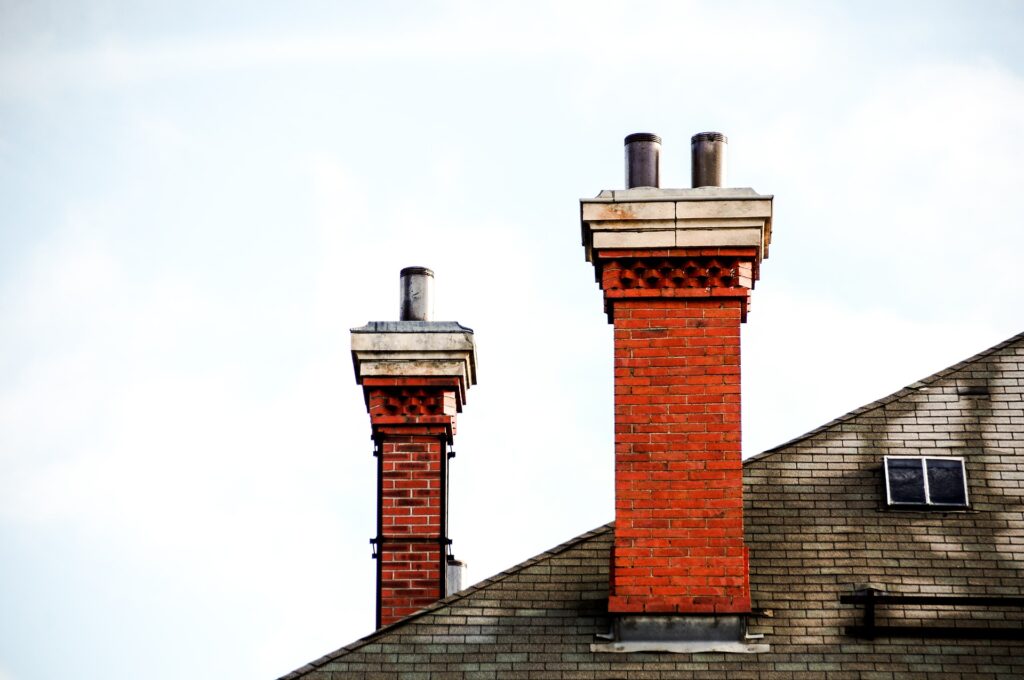 Do I need my chimney sweeping if I have a gas fireplace?

There’s another urban myth doing the rounds which says you don’t need your chimney sweeping if you have a gas fire.

If you have a gas appliance, you should still have your chimney inspected on an annual basis. This is to ensure that no dangerous blockages or damage has occurred.

However, if you have a balanced flue gas fire that is installed in the place of an old fireplace, you do not necessarily need to have the chimney inspected. This is because the gas fire is venting its fumes out of a co-axial tube through your exterior wall.

How to find a chimney sweep

If you’ve determined that your chimney is in need of an inspection and sweep, then you may be wondering where you can find a qualified and experienced chimney sweep.

Of course, there’s always Google. But, to help you find a reputable and suitably qualified chimney sweep, the National Association of Chimney Sweeps maintains a register of chimney sweeps which you can access here.

The Guild of Master Chimney Sweeps also maintains a ‘Find A Chimney Sweep’ database, which you can access here.

How much does a chimney sweep cost?

The cost of a full chimney sweep varies. How much you’ll pay will depend on the type of inspection that is required and the extent to which your chimney needs to be cleaned.

However, as a general rule of thumb, expect a basic chimney sweep to cost anywhere between £30 and £80. However, this price can be much higher in larger cities where there is more demand.

Seasonal changes will also impact prices. So, during autumn, when chimney sweeps are in highest demand, expect to pay more for an inspection and sweep.

How to prepare for your chimney to be cleaned

Once you’ve booked an appointment with a chimney sweep, you’ll want to make sure that your chimney, fireplace and the immediate surrounding area are ready for the cleaning to take place.

Cleaning a chimney, by its very nature, can be a messy job. So, you’ll want to clear your fireplace and mantel piece of any ornaments or other items. You will also want to clear up any leftover wood, ash, coal or burnt logs from the bed of your fireplace.

If you think your chimney may be particularly dirty (especially if you’re not sure when it was last cleaned), then you should take the precaution of covering your furniture and carpet in old blankets. This’ll give you some piece of mind in the event that any soot falls down the chimney.

Chimney sweeps will always take the utmost care to keep everything clean and tidy, but doing the things outlined above will certainly make their job a bit easier.

What is involved in a chimney inspection and sweep?

Most chimney sweeps will offer you three levels of sweep. Which level your chimney requires will depend on how much soot and creosote build-up has occurred, the length of time since it was left swept, how regularly the fireplace is used and other factors.

Here are the three different levels of inspection and sweep.

Once they’ve made this inspection they will decide whether or not your chimney needs sweeping. If it does, they will usually do this there and then, using brushes, extension poles and a vacuum to clear and clean your chimney. If you have an appliance such as a gas fire, the chimney sweep should reassemble and reinstall it once they have completed their inspection and sweep of the chimney cavity and flue. 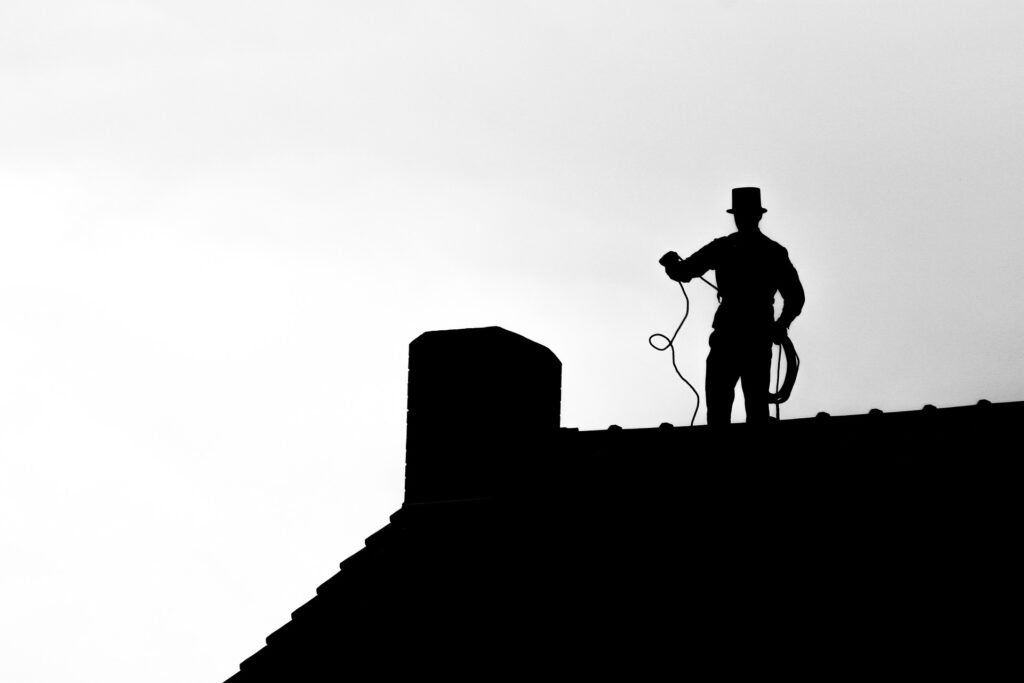 If you’ve recently made a major change to your fireplace (such as installing a new appliance) or made structural alterations to your chimney or fireplace, then you will require a level 2 inspection and sweep. A level 2 inspection is also recommended if you’ve only just bought a house or are unsure of the fireplace’s history of use.

During a level 2 inspection, the chimney sweep will carry out a number of tests:

Level 2 inspection jobs are sometimes carried out by two chimney sweeps rather than just one. Especially if they are dealing with a very large chimney/property.

Naturally, by its very nature, a level 3 inspection is the most expensive. It’ll often involve more than one chimney sweep along with the use of equipment such as scaffolding and will take multiple hours to complete.

If you have a chimney that is included in a Party Wall Award then you will need a special type of chimney inspection.

A Party Wall Award chimney inspection will involve the use of a special camera which can rotate 360 degrees and swivel 180 degrees so that it can capture a complete picture of the chimney flue.

A Party Wall Award chimney flue inspection includes a full inspection of all the open and working chimneys in the adjacent property as well as a smoke test.

These types of chimney inspections are often used as evidence in court – particularly if there is a dispute between you and your neighbours.

Yes. Your chimney sweep should provide you with a certificate once they have completed the inspection and sweep. You can use this certificate to prove to your home insurer that you have had your chimney inspected and swept by a qualified professional.

How to reduce how often your chimney needs to be swept

If you’re not keen on having your chimney inspected on a regular basis (but we would strongly recommend that you do have it inspected and cleaned regularly!), there are a number of things you can do to reduce how often you need to call your local chimney sweep.

We hope you’ve found our guide to chimney inspections and chimney sweeping helpful. To find more helpful chimney and fireplace advice, explore the rest of this blog.

What Kind of Chimney Do I Have For My Fire? | Fireplace Chimneys – A Complete Guide | Tips For Cleaning Your Fireplace