Media walls that combine a fireplace with a large television set are quickly becoming the interior design feature of choice. It’s easy to see why. They create an amazing focal point for a room, providing entertainment and warmth in one stunning package. But, what exactly are they and how can you create one in your home? Read on to find out more.

What is a media wall?

It may seem like an obvious question, but what exactly is a media wall?

Media walls first began to become popular in the late-2010s when large flatscreen televisions became widely affordable and available. Rather than using a garish and bulky TV stand, many homeowners instead chose to mount their flatscreen television on the wall above a pre-existing fireplace.

This trend quickly developed, with homeowners deciding to build a dedicated wall to host their television and fireplace. This trend was accelerated by the fact that many new build homes are not built with traditional fireplaces and chimneys. 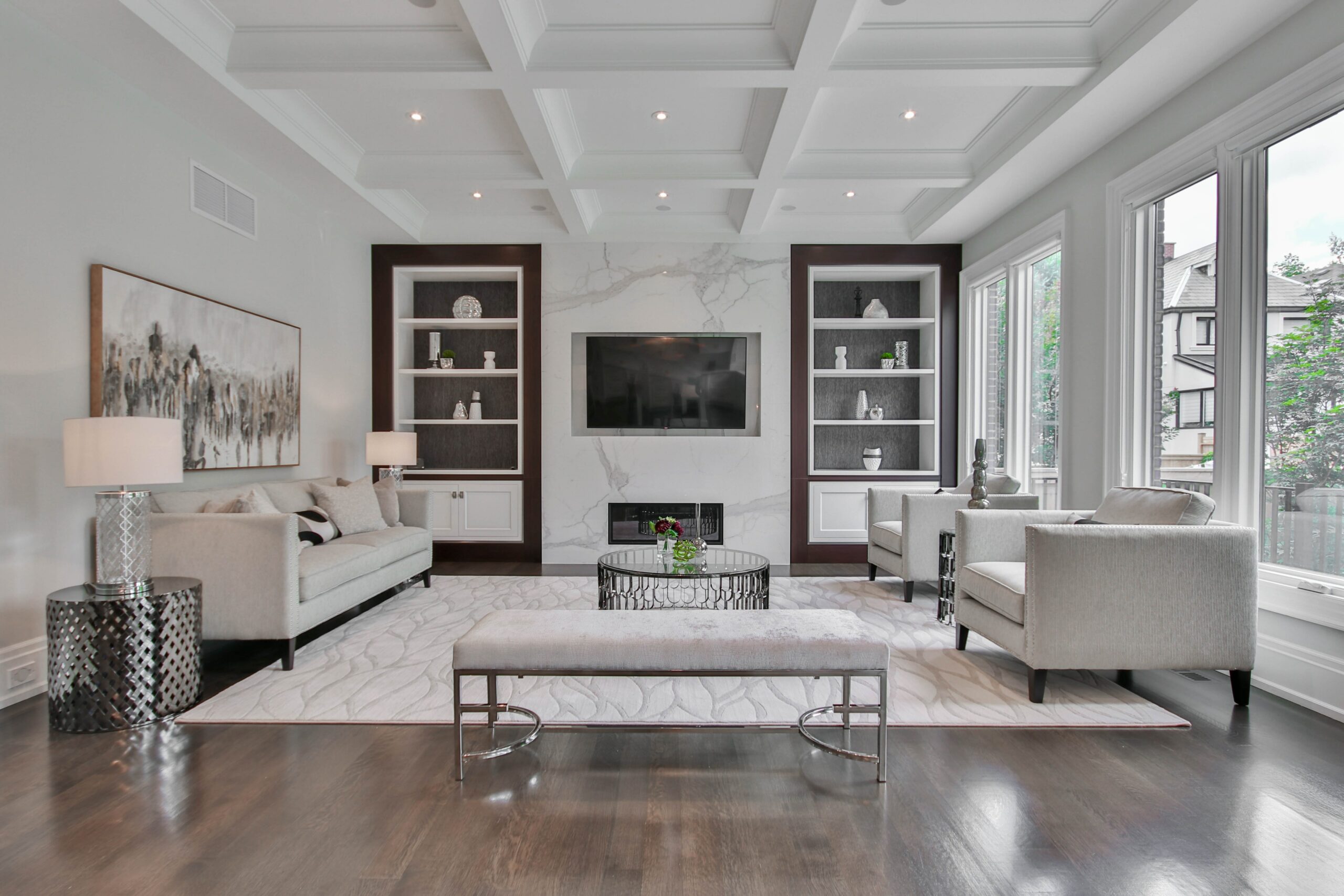 How to create a media wall with a fireplace

You might be wondering how you can create a media wall with a fireplace for your home.

Well, before you start reaching for the construction tools, we recommend you seek professional assistance, unless you are very experienced in home renovations.

Nevertheless, it’s worth knowing the process that goes into creating a media wall. It’s useful to know the right questions to ask any prospective builder/tradesman.

When it comes to the wall on which the television and fireplace will be mounted, you’ll find that most media walls are stud walls. A stud wall is usually built from a wooden frame which is then covered with plasterboard. The stud wall will jut into the room in much the same way a traditional chimney breast and fireplace would.

When creating a stud wall, it’s important to add dedicated recesses for the fireplace and television. So, you will need to know the dimensions of each of these before construction of the stud wall begins (otherwise, you’ll be facing some costly alterations further down the line).

You’ll also need to make sure that any necessary electrical wires are run into the stud wall before it is completed. Stud walls hide all of those unsightly cables that come with large televisions, which is one reason for their widespread appeal. They create a smooth, tidy aesthetic.

Stud walls also have the benefit of saving space in your room. Yes, they do take up some floorspace, but they do provide somewhere to put your television and fireplace. Plus, the fact that modern televisions and inset fireplaces are slimline, means that your media wall can be slimline and discrete too.

Media walls also offer endless options for customisation. You don’t just have to restrict yourself to a television and fireplace. Why not add illuminated alcoves to hold your DVDs or records? Or perhaps corner shelving to store books or other items? 10 minutes exploring Instagram will show you that it’s easy to create a media wall that’s highly customised to your needs. 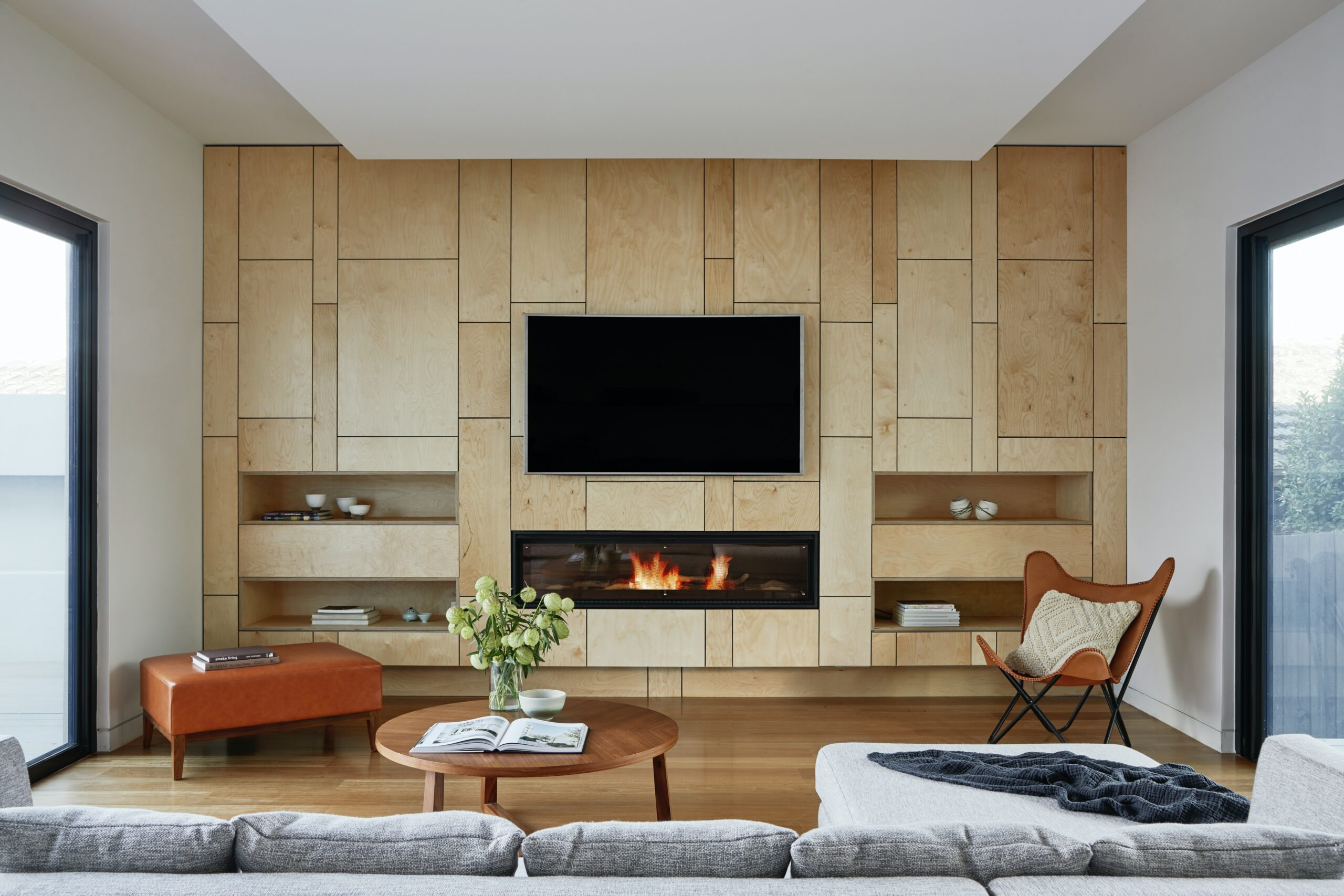 It’s also important to note that your wall doesn’t just have to replicate a chimney breast. Full media walls that stretch the width of the living room are now also becoming popular.

We’re not AV specialists here at Direct Fireplaces, so we’ll keep this section brief. In short, you need to make sure that the television you want to install in your media wall is of the appropriate dimensions (factor these into the construction of the stud wall), and comes with appropriate fitting brackets.

A stud wall is not a load bearing retaining wall, so you’ll need to bear this in mind when you’re looking at any installation instructions that may have come with the television.

You should also check your TV’s instructions (and warranty) to see if they contain instructions or warnings about potential heat damage.

How to choose a fireplace for your media wall

We’re bound to be biased, but we think the fireplace is the defining feature of a media wall. After all, a flatscreen television is just a large rectangle. A fireplace on the other hand provides lots of opportunities to tie together the decor of your room and dazzle with a beautiful display of colourful flames.

So, if you’re thinking of adding a media wall to your home, what things should you think about when buying a fireplace for it?

Make sure you select a fireplace which has a front heater. You want the heat generated from your fire to radiate out into your living room, not be lost within the cavity of the media wall. Look out for inset fires which have ‘front heaters’.

Inset fires are available in a huge variety of designs from traditional to contemporary. When selecting your fire, be careful not to consider its design in isolation. How will it compliment your television (and other media wall features)? To achieve a media wall with a cohesive look and feel, think about design elements holistically.

It’s important to check the manufacturer’s guidance on how much space you need to leave around your fire. Luckily, electric fires don’t produce real flames and with a front heater, the heat is being radiated out away from the wall. But, it’s worth-double checking to see if the manufacturer has specified how much clearance is required above, below and behind the fire.

To help you decide what kind of media wall and fireplace will be right for your home, we’ve collected some fantastic examples of media walls from our customers below.

Take a look and let them act as sources of inspiration! 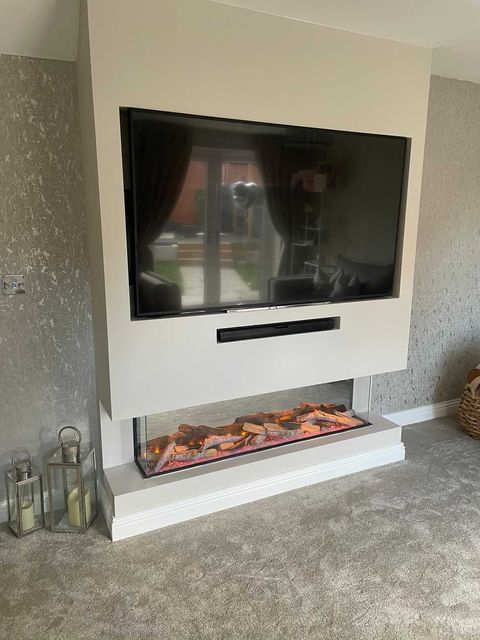 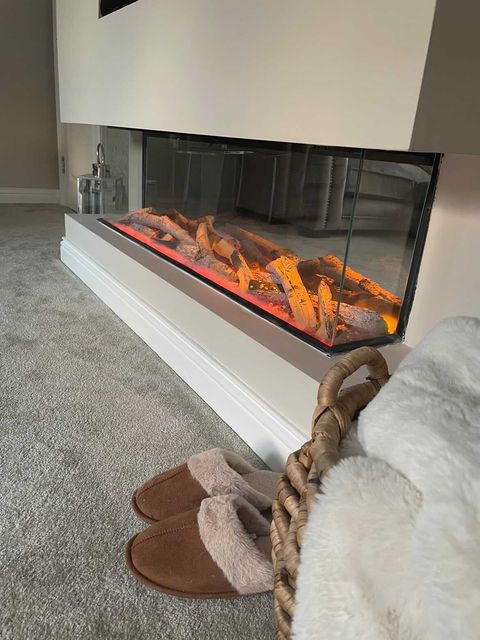 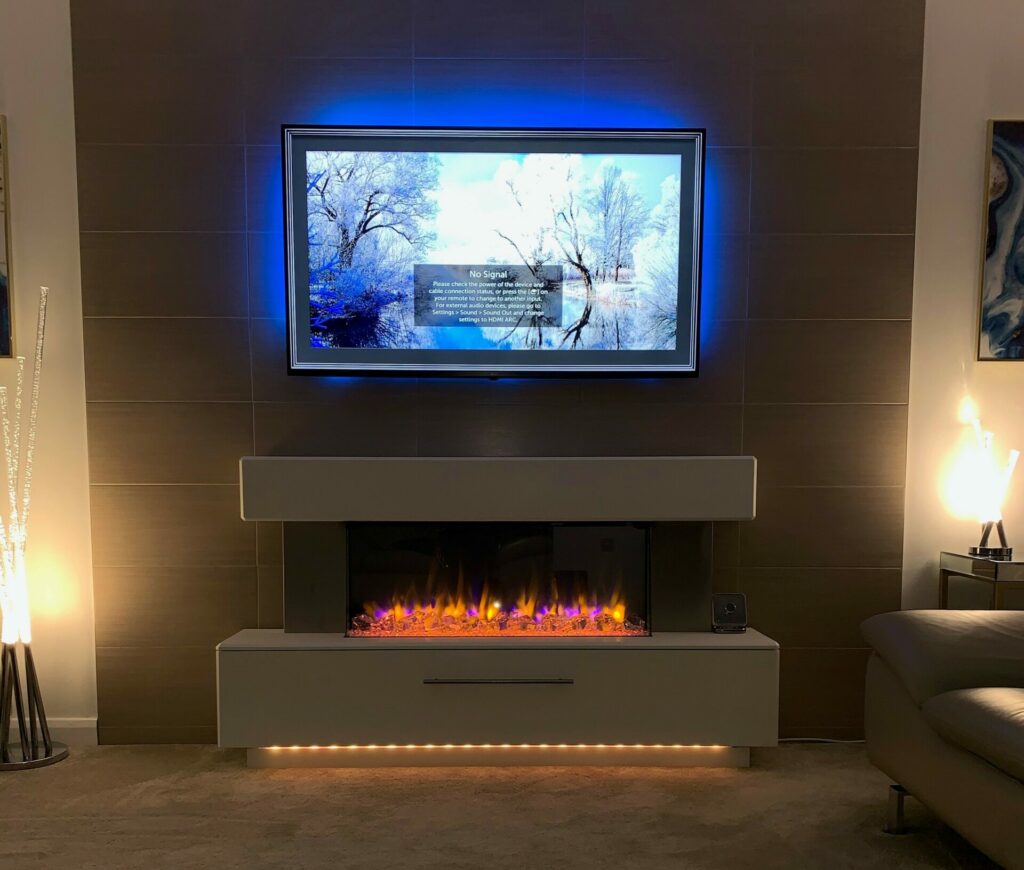 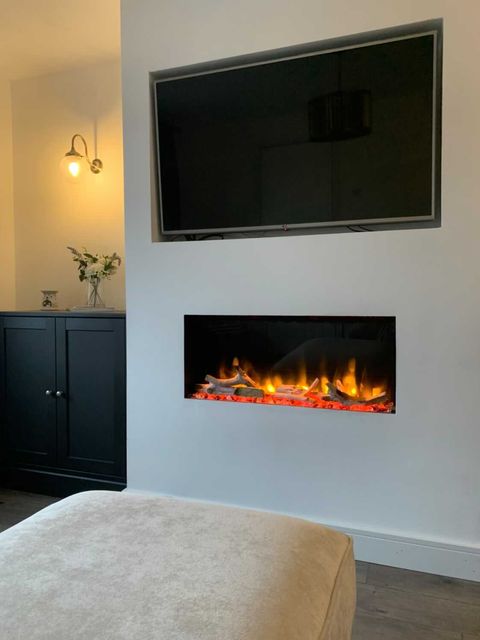 We hope you’re feeling suitably inspired! If you’d like to find out which fire could be perfect for your media wall, keep reading.

With those considerations in mind, it’s time to look at the best electric fires for media walls.

There is an enormous amount of choice – in fact, it can be quite overwhelming. Electric fire technology has progressed enormously in recent years, going so far as to incorporate things like virtual reality(!).

To help you choose the right fire for your media wall, we’ve outlined some of our favourites here at Direct Fireplaces below. 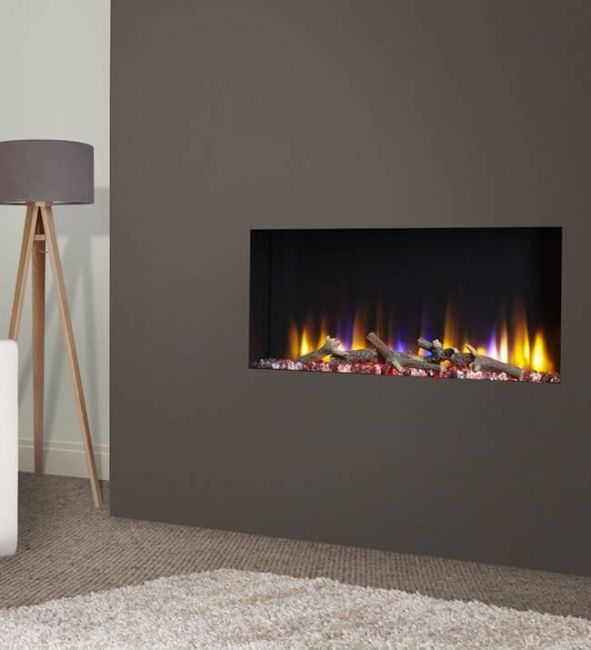 The Celsi Elite Ultiframe VR Electric Fire is the ideal option for large statement-making media walls. It’s not just its size which is impressive though. The Celsi Elite incorporates virtual reality technology to create a virtual flame display. It also features a deep fuel bed with supremely detailed ceramics that capture the shape and texture of natural logs.

The Celsi Elite is one eye-catching, attention-grabbing fire… 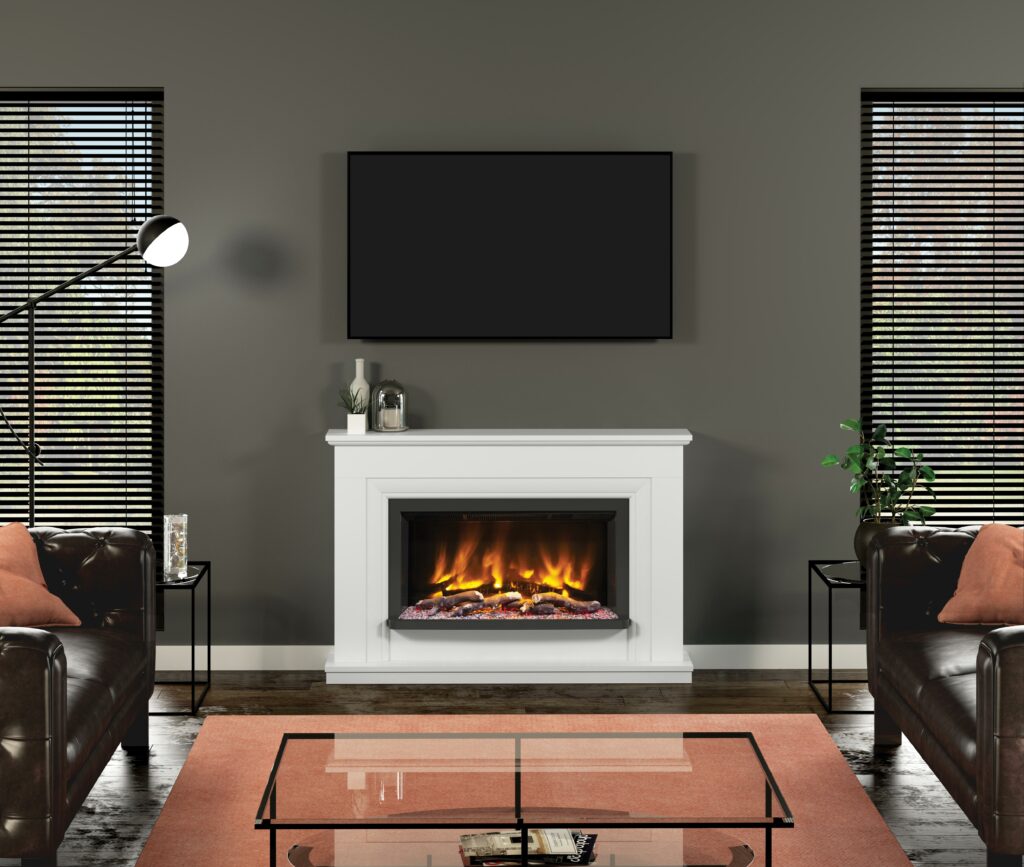 As part of the new PRYZM range from Elgin and Hall, this electric fireplace suite benefits from a captivating 5D flame effect as well as an ultra realistic pebble and log fuel bed. A bold and powerful statement, the Lavina makes the perfect accompaniment to a large television as part of a media wall. That’s why we’re such big fans of this fireplace at Direct Fireplaces. 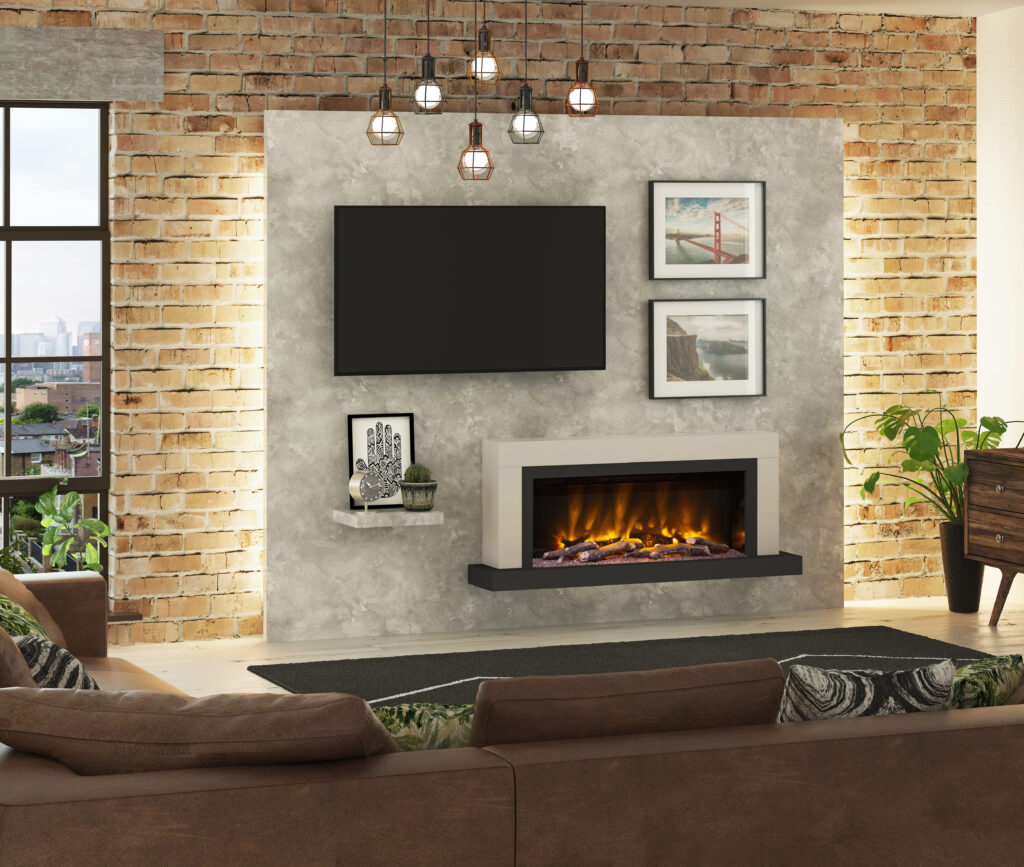 Arriving at Direct Fireplaces with the option of not one, not two, but three sizes, the PRYZM Vardo by Elgin and Hall can transform a media wall of any size. Take your pick from a choice of either Matt Cashmere and Anthracite, or Ash White and Vintage Oak finish. Go the extra mile and add an optional plinth for a floor standing look. The possibilities are endless. 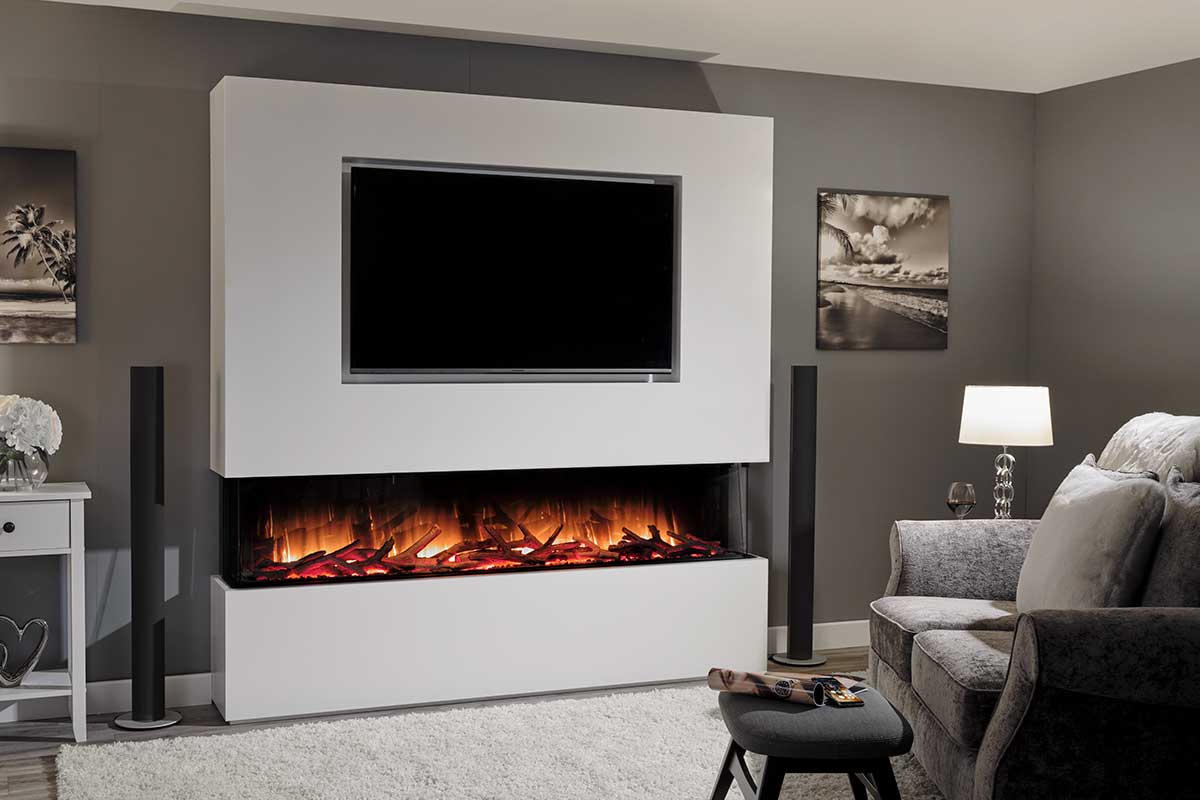 ‘Wow’. That’s probably the first word any visitor to your home will say when they see this fireplace. The Flamerite Glazer 1800 has been designed to be the focal point of a media wall. It features a realistic Cinderwood fuel bed and uses Flamerite’s ‘Omniglide’  tilting front glass screen to enhance the flame picture.

The Flamerite Glazer 1800 is also packed with the latest tech. Control every feature with the discretely hidden fire controls, by the smartphone app (Apple or Android) or by using the NitraFlame remote (optional). The Glazer 1800 also features a 7-day programmable timer, thermostatically controlled heat, dimmable LED flame effects and an open window detection system. This thing is seriously impressive! 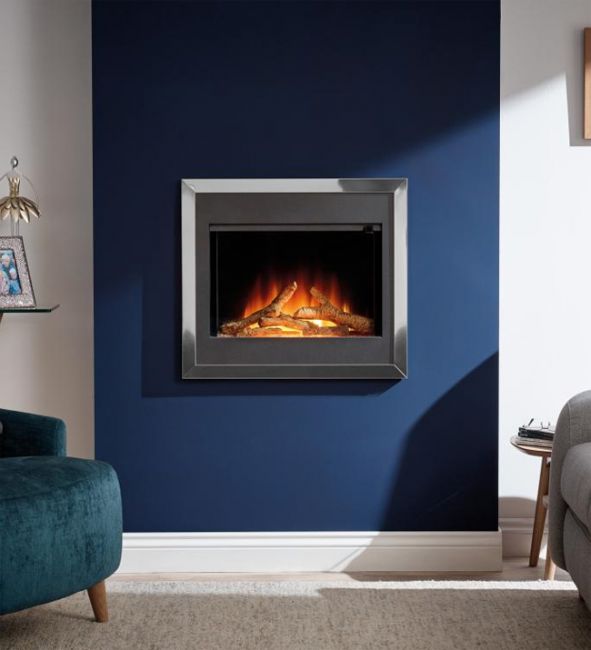 For a more traditional look, there’s the Atlanta 3 from Flamerite. It comes with a choice of brass or chrome four sided trim as well as the option to have a contemporary white/pebble bead fuel bed or a traditional small cinder wood effect fuel bed.

Just because it offers a traditional look, doesn’t mean it’s not packed with modern features though. The Atlanta 3 can be remote-controlled by a smartphone app, it features a 3D flame effect and an independently controlled fan heater offering two heat settings of 750w or 1500w. If you want an electric wall fire that can do it all, the Flamerite Atlanta 3 is a strong contender. 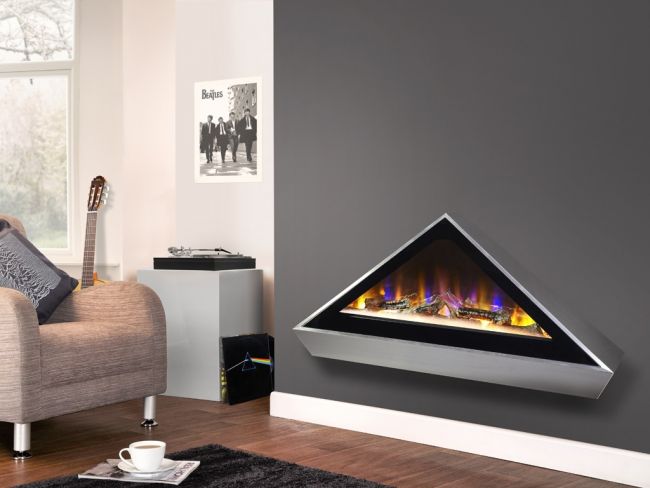 At the more radical end of the design spectrum is Celsi’s Electriflame VR Louvre Electric Fire which stands out from the rest of the fires on the market thanks to its unique shape and combination of satin silver and black glass.

Like the other Celsi fire on this list, the Electriflame VR Louvre fire makes use of virtual reality technology to create a truly stunning flame display. The 3D projection technology gives the impression of flames in the centre and rear of the fuel bed. 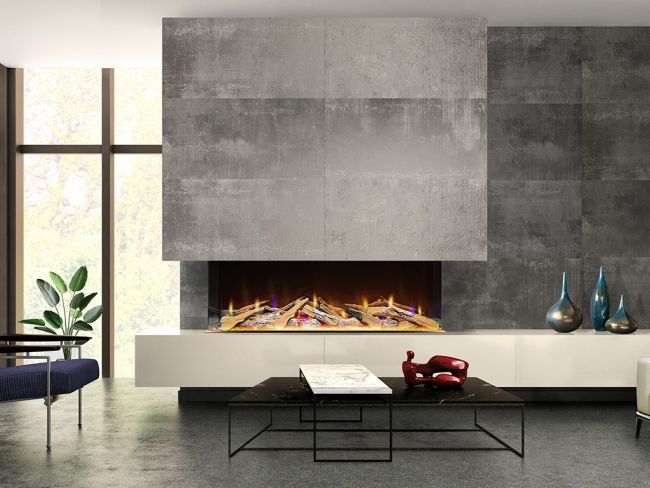 Perhaps the fire with the boldest aesthetic on the list is the Celsi Electriflame VR 100 Electric Fire. The fire’s glass fronted, three sided design makes it visually stunning; the perfect fireplace for a bold media wall.

The Celsi Electriflame VR 100 features E-VR Flame Projection Technology, which creates a totally natural log fire effect over the silver birch log fuel bed. It can also be installed as a two-sided or single glass fronted fireplace, so you’ve plenty of options when designing your media wall.

These are just a few of our favourite electric fires for media walls. We have a whole lot more options available….

More from the Direct Fireplaces blog…